59 years ago, this Hindu man built a mosque funded by a Christian 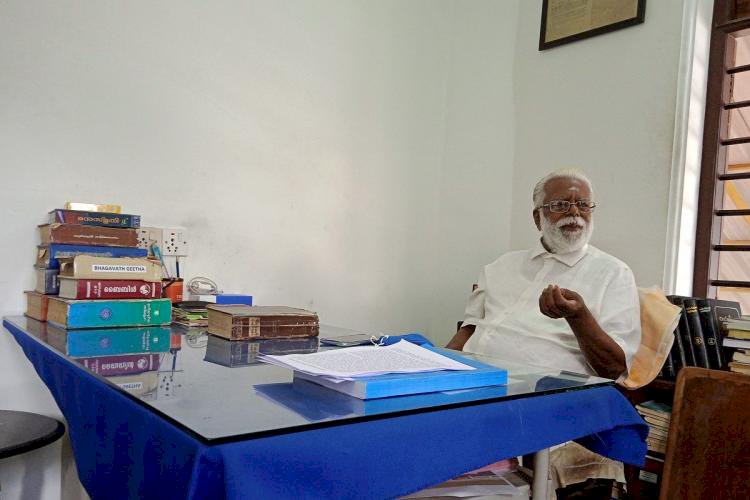 HE sits behind a desk in what looks like an office room that has big arched windows and faces the front yard of the home.

G Gopalakrishnan is the builder and owner of the house that sits in a pocket road of Thiruvananthapuram, a kilometre away from the buzzing Bakery Junction of Palayam. And on one corner of his desk sit three thick volumes – the Quran, the Bible and the Bhagavad Gita, one on top of the other.

Gopalakrishnan, with a hearty smile, likes to start his story from the very beginning when many decades ago as a child he became attracted to the world of buildings and architecture.

Among all he has built, it is his mosques that invite interest from around the world – a Hindu man building so many of them. There are 111 in and around the state. Four churches and a temple near his house are also part of his portfolio.

“The idea of the brotherhood of man was born in me in the summer of 1962, when circumstances brought to our family – a Hindu one – the work of building a Muslim mosque, with funds coming from a Christian. That’s what made me start Manavamaithri (Universal Brotherhood), a charitable society, in 2002,” Gopalakrishnan says, his eyes filling with passion as he talks of brotherhood. He is 85 years old now, and the memories are spilling from 60 odd years ago.

That summer in 1962, the work that came to his family – his father, a contractor called Govindan who was his first teacher, and himself – was to rebuild the Palayam Juma Masjid, supervised by Chief Engineer TP Kuttiammu Sahib. Gopalakrishnan becomes spirited when he talks of Kuttiammu Sahib with whom he had a lifelong friendship.

The drawings for the Palayam Juma Masjid were made by the then Chief Architect JC Alexander and then a tender was called for the building of the mosque. Even though Govindan got the tender, the family had little money to fund the building.

That was the time Gopalakrishnan got Rs 5,000 from PP Chummar, an official at the AG’s office, for whom he had prepared a plan and estimate to get a loan. Chummar was happy to let Gopalakrishnan use it for the mosque since his needs for a building were not urgent.

“That’s how Christian’s money was used by a Hindu family to build a Muslim mosque,” Gopalakrishnan says.

Five years later the mosque was completed and was inaugurated by then President of India Zakir Hussain.

The same year, 1967, Gopalakrishnan received another major project, again through Kuttiammu Sahib. He was to make the plans for the rebuilding of the Beemapally Dargah Shareef, a famous mosque in the outskirts of Thiruvananthapuram.

“I was 31 and so thrilled. There was no electricity in the house then and I worked on the plan day and night. When finally the plan was complete and I took it to Kuttiammu Sahib, he said it was beautiful,” says Gopalakrishnan with child-like excitement.

It showcases Indo-Persian architecture. Gopalakrishnan put two minarets and a dome in the plan, a structure hitherto unused in mosques in Kerala. Until then, mosques in the state were mostly built with traditional tiled roofing, a style followed in temples.

Gopalakrishnan says he borrowed ideas from two books. One of these, he has kept in a pile by the arched window – Percy Brown’s Indian Architecture (Islamic Period) – a stack of photocopied pages bound in black.

Gopalakrishnan points to a photo on the wall. It has yellowed over the years, but the picture is clear. It is the same beautiful pink structure that you now see in Beemapally, the region that hosts the mosque.

It took 17 years to finish the work. In the years between, he built houses and more mosques, including the famous Vavar mosque in Erumely, en route the Sabarimala pilgrimage.

After he had built around 60 mosques, friends asked if he’d not build a church. “I’d tell them I would if someone asked me to. Around that time, a priest came to my office in Palayam with a few others and asked if I could build the Chandanappally (St George Orthodox Valiya Pally) in Pathanamthitta. That’s the work you see there,” Gopalakrishnan says, pointing to a framed photograph of the church he has placed behind rows of awards he received over the years.

It is a beautiful white structure, perched in the middle of lush green foliage. Three more churches were built in the years that passed. The only temple he built was 40 years ago and is the Alinkandam Bhadrakali that is near his home.

The communal harmony of his buildings exists in his home too. He married Vijayamma, a Christian, in what both insist was an arranged marriage. Their three sons are married too, two of them to families of inter-caste marriages. One of the sons is an architect and helped in the building of their Bakery Junction house, Vijayamma says.

But the son probably wouldn’t have done what Gopalakrishnan did as a child - going to his father’s sites with his lunchbox and watching the buildings he built. Little Gopalakrishnan didn’t have tracing papers so he rubbed his notebook papers over his head to make them oily and would then trace the plans.

He would watch the structures being built at his father’s site and see if they came up according to the plans he drew. Such love for the art led him on to a life building places of worship that he speaks about with so much reverence.

“One day in the future, people will only have a single address: earth. There will not be these many divisions separating us. In the big picture, we are that minuscule, we are just beings of the earth,” Gopalakrishnan says.

These thoughts and more are in his book that he’s finished a draft of titled, Njan Kanda Quran (The Quran I saw) – Volume 1. - The News Minute