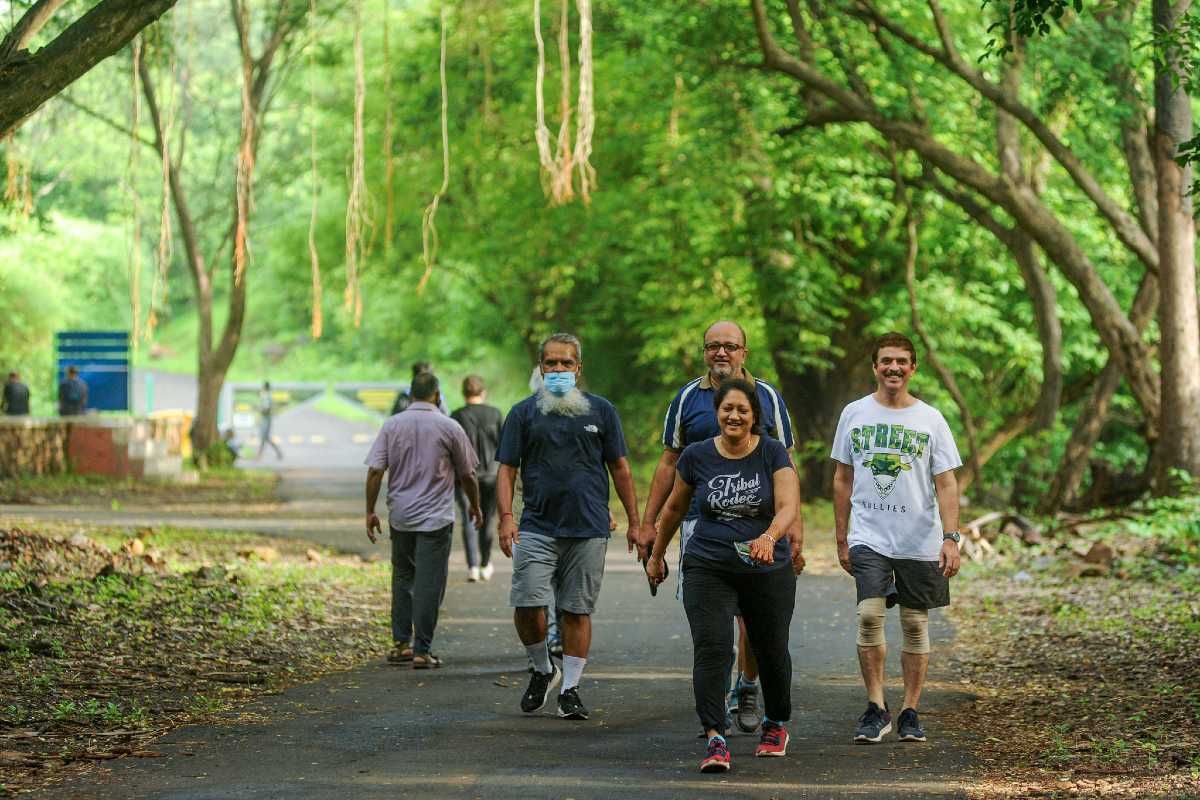 REACHING 10,000 steps in a day has become the de-facto target around the world that many people associate with being fit, healthy and ageing well. Now, a new study says a lower — and more achievable — daily goal of 7,000 steps will still yield substantial health benefits.

The new study from the US in 2,100 adults aged over 40 found that while 10,000 steps may well be an optimal health goal, adults can still achieve significant health benefits from only 7,000 steps per day.

From marketing to medical advice

The 10,000 step benchmark originated from a marketing campaign rather than a specific health objective. A Japanese company (Yamasa Corporation) built a campaign for their new step-tracker off the momentum of the 1964 Tokyo Olympics. The pedometer’s brand name — Manpo-Kei means 10,000 step meter in English — and a new phenomenon was born.

The researchers in the new study, which demonstrated significant health benefits from 7,000 steps a day, collected data using wearable sensors (triaxial accelerometers similar to those used in smartwatches and phones) and followed participants over a period of around ten years. Researchers looked at the average step counts and analysed the risk of death (after controlling for other factors that might influence the result, like poor health, smoking, and diet).

Compared to adults who walked less than 7,000 steps per day on average, those who reached between 7,000 and 9,999 steps per day had a 60% to 70% lower risk of early death from any cause. The effect was the same for both men and women. But there wasn’t significant further reduction in the risk of early death for those who walked more than 10,000 steps.

The effective step target might be even lower in older women. A 2019 study of 16,741 women with a mean age of 72 years found those who averaged around 4,400 steps per day had significantly lower mortality rates when they were followed up more than four years later, compared with the least active women in the study.

Not such a need for speed

The researchers found health benefits were not affected by walking pace (based on the peak steps per minute over a 30-minute period) or intensity (the total time with over 100 steps per minute).

These findings corroborate a 2020 publication and further confirm the WHO’s 2020 physical activity report that tells us “every move counts”. Research has shown walking to increase our individual speed could be more important than absolute speed — emphasising the goal to challenge ourselves while out walking for exercise.

What about during lockdown?

A large UK study shows prolonged lockdown conditions may limit our movement to 3,500 steps a day. And we know less physical activity not only affects physical health, but also mental health.

Exercise during lockdown is considered an essential activity by various health authorities — as important as obtaining food and medical care. There is no one-size fits all when it comes to fitness. And there are many different innovative ways to stay active while we’re at home.

For those people who don’t have mobility issues, walking provides therapeutic benefits and is an excellent activity for health. It is free of charge, expends energy at any pace, can be done all year round and is a habit-forming activity.

While it is estimated more than a quarter of the world’s population is physically inactive, an easy and achievable solution might be right on our doorstep.

Whether we walk or do other physical activities, it is important we do so at a speed and intensity appropriate to our personal abilities and physical capacity.

More research is needed to understand the potential long-term health benefits across the lifespan of light-intensity activities such as household activities like gardening, watering the garden or vacuuming. But evidence continues to affirm that stepping to the beat of your own drum can ensure health benefits, prevent premature death and set attainable benchmarks to make us want to keep active and motivated to continue.

Whether you take 7,000 or more steps a day, the most important message is every single step counts.