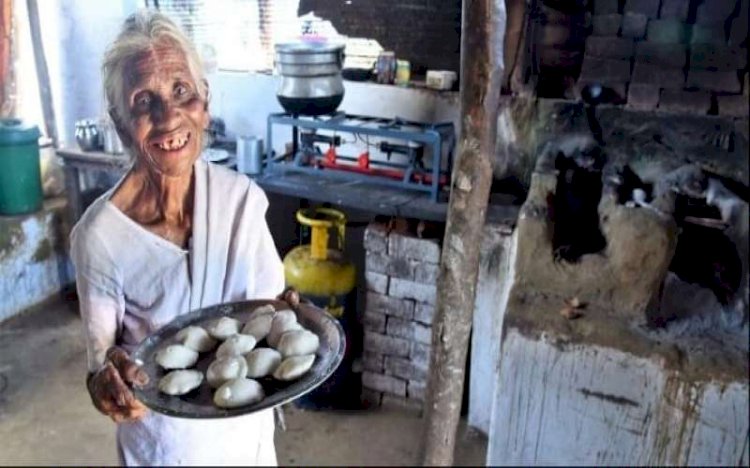 AS a Mother’s Day gift, industrialist Anand Mahindra on Sunday gifted a house to Coimbatore’s 82-year-old ‘idli paati’ Kamalathal, who shot to fame a couple of years ago for selling idlis for just one rupee.

The paati’s new house is located at Vadivelampalayam, 50 metres away from her current residence. Mahindra Lifespace constructed the house in 1.75 cents of land, which was purchased and registered in her name.

‘Idli paati’, as Kamalathal is fondly called, runs a small eatery from her home, and is a one-man army churning out almost 1,000 idlis from her small home. In 2019, TNM’s video on Kamalathal had gone massively viral, with Anand Mahindra and many others — including Bharath Gas, Hindustan Petroleum, Thyrocare Technologies — offering her help to run her eatery.

On Sunday, Anand Mahindra recalled his 2019 tweet where he had shared the video and had expressed a wish to invest in her business. He shared a video of Kamalathal cutting the ribbon to her new home. He said that Kamalathal had expressed the need for a better workspace, and hence, the Mahindra Group obliged with a new home. Anand Mahindra thanked the group for ensuring that her house was built in time for Mother’s Day.

In the video, Kamalathal thanks Anand Mahindra for gifting her a new home. “Pugal (from Mahindra) came to my hut one day and saw that it was too congested. I requested him to build a house for me. He promised to check and get back to me,” she is seen saying in the video. “I am so happy and very much indebted to Ayya [Mr. Mahindra]. I will continue to sell idlis at the same price as long as I am able to prepare them.”

Chief Operating Officer of Mahindra Water Utilities Limited KM Pugezhendhi told the Hindu that he was the one who handed over the key to Kamalathal. He had also said that the chairman Anand Mahindra had instructed to build the house based on her needs and use.

“The house has a dining area where she can serve idlis to people and it has an open window to the kitchen. There is also a room attached with a bathroom-cum-toilet. Mahindra Group invested around Rs 12 lakh for the noble cause,” he said.