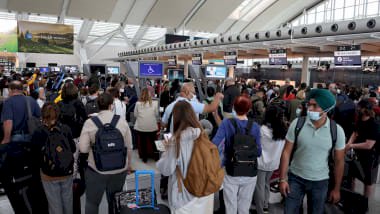 THE IATA chief recently warned that the prices of airline tickets will go up "without doubt" as fuel costs rise. Oil prices have jumped as economies recover from the Covid pandemic and also due to the war in Ukraine, news portals, quoting IANS, report.

These costs will be passed on to consumers, Willie Walsh, director general of the International Air Transport Association (IATA), said, reports BBC. "Flying will be more expensive for consumers, without doubt", he said, adding that the "high price of oil" will be "reflected in higher ticket prices".

Due to the rise in fuel prices, domestic and international airfares in India have witnessed a surge of up to 50% in the last few months.

Airfares at American Airlines, Delta Air Lines and United Airlines - the three largest US domestic carriers - shot up nearly 50 per cent for the week ending May 23 compared to a year ago, according to an analysis by Cowen, a financial services firm. Cowen tracked nearly 300 routes across four different fare categories for the carriers using data from New York-based Harrell Associates, which tracks airline pricing trends, CBS reported.

A 0.3% MoM decrease was registered in India in May, in YoY terms traffic increased by 405.7% in this domestic market, as per IATA.

Oil prices were already rising as demand picked up again in economies that had started recovering from the Covid pandemic.

The fallout from the war in Ukraine has pushed prices up further. The US has announced a complete ban on oil imports from Russia, while the UK is to phase out Russian supplies by the end of the year, BBC reported.

European Union leaders have said they will block most Russian oil imports by the end of 2022.

This means demand for oil from other producers has increased, leading to higher prices.

Walsh said fuel prices were at record highs, and that "oil is the single biggest element of an airline's cost base", BBC reported.

"It's inevitable that ultimately the high oil prices will be passed through to consumers in higher ticket prices."

The global industry's recovery accelerated and global international RPKs are now at 64.1% of pre-crisis levels. Global domestic RPKs reached 76.7% of the 2019 level in May. Compared to April 2022, global RPKs grew 10.7% month-on-month (MoM).

First ship to berth in Vizhinjam Port in March 2023