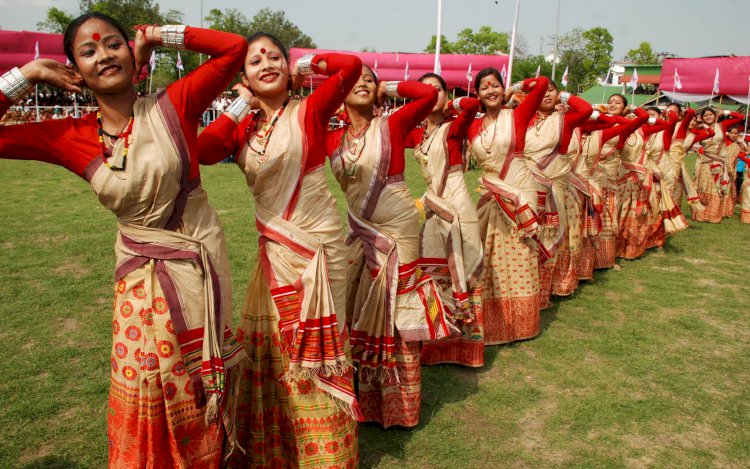 THE northeastern states on Friday celebrated Rongali Bihu and Poila Boishakh with traditional fervour and enthusiasm. These festivities were affected in Assam and other northeastern states since 2019 due to agitations against the Citizenship (Amendment) Act and Covid-19 situation, online news sites report quoting IANS.

A festive atmosphere prevailed in the residential areas, villages and in mela (fair) grounds in the region.

People in Assam and other northeastern states were gripped in the spirit of Rongali or Bohag Bihu, the beginning of the Assamese New Year, giving a glimpse of the pre-pandemic festive fervour.

All the three Bihu festivals could not be properly celebrated last year (2021), and also in 2020 due to the Covid situation, and the demonstrations against the Citizenship (Amendment) Act.

Assam's week-long spring festival, 'Rongali Bihu', started on Thursday with the first day being dedicated to cattle. Before the actual 'Rongali' starts on Friday, the 'Garu Bihu' is observed on Thursday when all the households in villages bathe their cows by the riverside.

People also exchange various gifts, including the traditional 'Gamocha' (a white piece of cloth with a red border having a customary pattern), with their near and dear ones as a mark of love.

Women were seen making various delicacies, besides 'pithas' (rice cakes) while the markets are flooded with hundreds of traditional food items along with clothes to celebrate the festival.

Shoppers, especially women, throng the markets to buy their favourite clothes to mark the tradition of wearing new clothes on the first day of 'Bohag'.

The people also exchange various gifts, including the traditional 'Gamocha' (a white piece of cloth with a red border having a customary pattern), with their near and dear ones as a mark of love.

Besides mouth-watering and delicious food, dance, cultural functions and songs are the main attractions of 'Rongali Bihu'.

The Assam government has also given 'Bihu financial aid' to the Bihu organisers -- a grant of Rs 1.50 lakh to each of the Bihu committees.

Besides Bihu, Poila Boishakh or Bengali New Year is also being celebrated along with numerous events including cultural functions in Tripura, Assam, Manipur and other northeastern states.