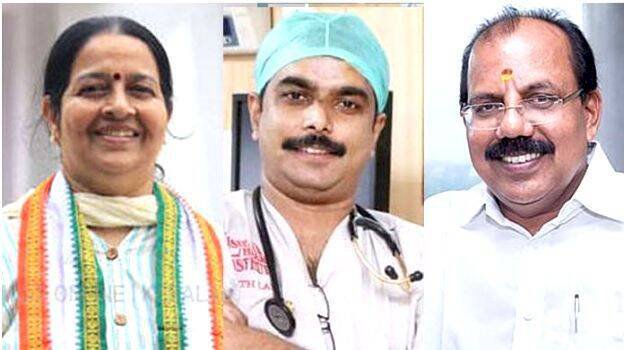 THE campaigning for the Thrikkakara by-election to be held on May 31 has gained momentum with all three major fronts — CPM-led Left Democratic Front (LDF), Congress-led United Democratic Front (UDF) and the BJP-led National Democratic Alliance (NDA) are out to woo voters.

The election to Thrikkakara was necessitated following the demise of sitting MLA, P.T. Thomas. Now his wife Uma Thomas is contesting on the UDF ticket. Practicing cardiologist at a leading private hospital in Kochi, Dr Jo Joseph is contesting as a CPI-M candidate while a former RSS pracharak and state Vice President of the BJP, A.N. Radhakishnan is contesting as the NDA candidate.

Thrikkakara has a large population of Christian community and all the candidates are visiting the churches to woo the voters.

While CPI-M brought in Dr Jo Joseph as a surprise candidate to capitalise on the upper-class nature of the constituency, things at present seem to favour Uma Thomas in a traditionally UDF bastion.

Kerala Chief Minister Pinarayi Vijayan who was actively campaigning by staying in the constituency for some time has quietly left for the state capital giving an opportunity to the UDF to say the Chief Minister has no hope here and hence a quiet retreat.

The social media wings of both the UDF and the NDA are active with the UDF camp bringing out trolls and campaign materials against the ‘misrule’ of the state government. The LDF social media wing is handled by the party district committee office, Lenin Centre and has put an iron cover and has barred entry to media there.

BJP state president K. Surendran is leading the party campaign in Thrikkakara and with his arrival on Sunday, the campaign for the NDA candidate, A.N. Radhakrishnan has gained momentum.