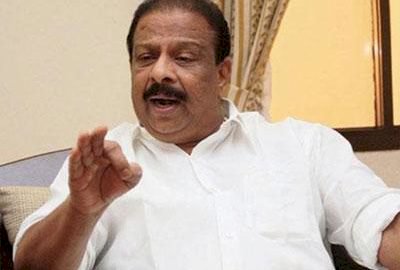 THE million dollar question on the lips of those who follow Congress politics in Kerala is — can Kannur strongman K. Sudhakaran who assumes his office as the new state Congress party president on Wednesday morning, revive the party’s fortunes in the state?

The Congress party is going through its worst ever crisis period, ever since it was humbled by the Pinarayi Vijayan government in the April 6 assembly polls, when he single handedly retained power, a thing that has not happened in the state for a long time.

Sudhakaran is presently the Kannur Lok Sabha member and was also a former State Minister in the A.K. Antony cabinet (2001-4) and is one personality which the CPI-M in the state especially in Kannur dread, his bold styled approach, which is uncommon among Congress leaders in the state.

A media critic on condition of anonymity said it’s not going to be easy for Sudhakaran, if you look into his predecessors and the way they ran the show.

“All know that Congress politics in Kerala has always been cantered around factions and his immediate two predecessors - V.M. Sudheeran and Mullapally Ramachandran - never got the full support of the faction managers - Oommen Chandy and outgoing Leader of Opposition Ramesh Chennithala - and to a large extent, it was the primary reason for them to have an early exit,” said the critic.

“But one difference between those two and Sudhakaran is the latter is not a push over personality and that’s best known to the CPI-M in Kannur. Even his detractors will admit, had it not been Sudhakaran, the party would have been wiped out in Kannur. So things will unfurl, once Sudhakaran hits the road for reviving the party,” added the critic.

Sudhakaran, though not the choice of the Chandy-Chennithala combine, has gone on record to say that he will do nothing on his own and will always take the advice of the two before he makes any major changes to the style and functioning of the party.

Chandy has also said, “now that the party high command has selected Sudhakaran, all will rally behind him and will go forward with him at the helm,” said Chandy.

It’s just going to be a matter of time for all to watch the strategy of Sudhakaran, as one will be able to see if he downsizes the massive size of the state and district level committees, and if he does that, it would be a clear signal to the senior party veterans that he means business, as all along such committees hitherto were parking bays for the close aides of the two.

AICC general secretary in charge of Kerala-Tariq Anwar will be present when Sudhakaran assumes office and the former’s first task is a one-on-one meeting with the two veterans, who continue to be miffed in the way they were kept in the dark, not just when Sudhakaran was named, but also, when three deputies of the president were chosen arbitrarily by the high command.

The high command perhaps for the first time made its own selection and appointed V.D. Satheesan as Leader of Opposition and then came Sudhakaran’s appointment.

There is one more post to be filled and it’s that of the UDF convenor and when Anwar winds up his present visit, that post also will be announced and none knows who is going to take over and it could well be another surprise from the high command to prove that they will not succumb to pulls and pressures and if this happens, then Sudhakaran could well be the winner as he has been handpicked by the high command. - Bhaskar Live

NEWS IN BRIEF: Westerlies may slow progress of monsoon