Fear and anger in Vandiperiyar village after murder of girl, 6 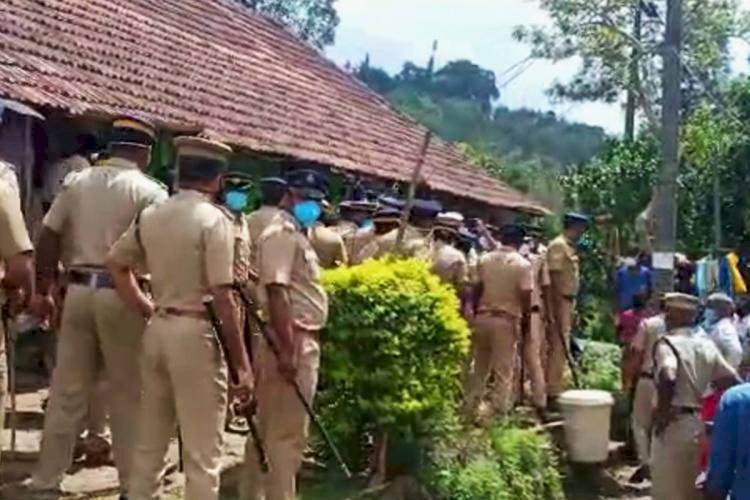 “DON'T let him leave here alive...I will kill him…” an old woman is heard screaming, as others restrain her to stop her from charging at a young man being taken away by apolice personnel.

In another visual, an old man can be seen breaking the police circle and slapping the same young man.

Over the last few days, people at the Churakulam village in Idukki’s Vandiperiyar have been plunged into emotional despair after a six-year-old girl was murdered on June 30 following a brutal sexual assault allegedly by a 22-year-old neighbour.

According to the police, the neighbour Arjun, a local worker with the Democratic Youth Federation of India (youth wing of the CPI(M)), began sexually assaulting the child years ago. And when he was brought for evidence collection by the police over the last few days, the village reacted with outrage.

Arjun was taken to the village thrice by the police for inquest. On the first occasion on July 6, evidence collection could not be done properly as scores of people thronged the place, most simply curious.

After witnessing the crowds on July 6, a large group of policemen accompanied Arjun on July 11, forming a protective layer around him. But by then, with news channels and newspapers explaining every sordid detail of the crime, the anger in the village had grown.

According to the police, Arjun believed the girl had died after the sexual assault, and staged her body to appear as if she had taken her own life. However, the girl was still alive, but Arjun did not release her. She eventually succumbed.

Even as the crowd wailed for the child and abused Arjun, the large number of police personnel ensured that the procedure was completed. Villagers, including the family of the deceased girl, can be seen running behind him, asking the police to ‘hand him over to them’.

Videos from the place show Arjun entering one of the many line houses, where he allegedly raped and murdered the six-year-old girl. He then enacted how he came out of the house through a small window, after committing the crime.

And as they were leaving after completing the procedure, once again, family members and others charged at Arjun. While someone from the crowd managed to slap Arjun, there were also reports that one person tried to attack Arjun with a knife. However, police managed to safely shift the accused from the spot. Meanwhile, investigation officers also told TNM that the outrage was expected and they were relieved nothing untoward had happened.

Last week, the police also took Arjun to a grocery store in the region. It was from this shop that Arjun used to buy chocolates for the girl. The shopkeepers could be seen on video telling the police that they have known Arjun all his life and he had bought chocolates even on June 30, the day of the murder.

“Though Arjun was arrested, most of the people did not believe he was the real accused. So that day (July 6), there was no outrage but only surprise and confusion. But things started to change as the media started reporting that police had found that Arjun had been assaulting the girl for the past three years. Since she was just three years old, imagine that? Who would do that? People were very outraged upon learning this and it is amid this that he was brought to the house for inquest a second time,” says Kowsalya R, Nellimalla ward member of Vandiperiyar gram panchayat.

She adds that many young people who had earlier sworn that Arjun was innocent later came to her with apologies. Kowsalya also recalls how Arjun appeared to have cried the most during the girl’s burial. “Everyone was then wondering why Arjun was crying so much. I even asked him, and he said he was very friendly with the girl. I believed him like many others, but thinking back now, things make sense,” adds Kowsalya.

The heinous crime has also taken an emotional toll on the people of the region. Residents in Churakulam village, most of whom are plantation workers, now live on the edge, fearing to leave their children alone at home like they once did while going to work.

“People are now afraid to leave children alone in their homes. Either one of the parents takes turns to stay back with the children, or they come in between their work twice a day to check on the children. Everyone has lost their peace of mind. People don’t know whom to believe, since even Arjun was considered a very good person,” says Kowsalya.

Arjun was popular in the village and used to participate in most citizen drives, including ones organised during the pandemic. That a person who was otherwise known as an active member of the community and had access to several homes, has allegedly committed the crime, has only added to the anxiety.

Kowsalya also adds that children in neighbouring villages are now scared even to step into Churakulam village. “I keep going to Churakulam since I am the ward member, but when I call someone along, especially children, they won’t come as they are afraid,” she adds. She also adds that there is a need to sensitise children to share things openly with their families. - The News Minute