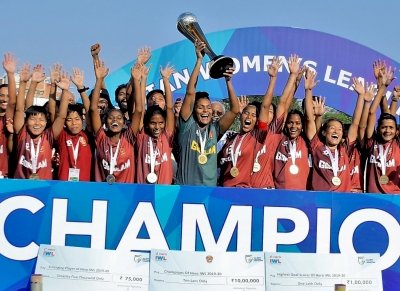 The winners of the Indian Women's League compete in the AFC Women's Club Championship. But since the fifth edition of the tournament was not held, the AIFF has nominated the GKFC, the champions of the fourth edition.

"We would like to inform you that after having a discussion with the local organising committee (Odisha Sports), the AIFF has decided to postpone the fifth edition of the IWL for a few months, keeping in mind the monsoon, and an expected third wave of infections," said AIFF general secretary Kushal Das in a letter addressed to AFC general secretary Dato Windsor John.

The fifth edition of the IWL was originally to be held in Bhubaneswar by Odisha Sports in coordination with the AIFF. But it was postponed due to the second wave of the Covid-19 pandemic.

Keeping the options open, the league committee then took a decision to conduct it later, subject to health parameters.

"We will continue in investing in women's football. We are happy that our women's team will play the continental championship before our men's team. We want our women to lift the AFC trophy first and set an example for our men's team," said GKFC chairman Gokulam Gopalan.

The 2019-20 season win was the first ever title triumph for the Gokulam Kerala FC. - daijiworld

If MLA uses revolver in Assembly, is House supreme?