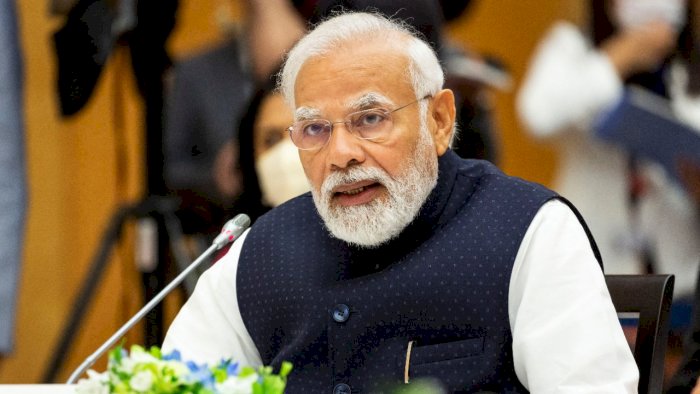 Modi will be visiting the UAE after attending the G7 Summit, and will be travelling to the United Arab Emirates (UAE) on June 28 to pay his personal condolences on the passing away of H.H. Sheikh Khalifa bin Zayed Al Nahyan, the former UAE President and Abu Dhabi Ruler.

Modi will also take the opportunity to congratulate H.H. Sheikh Mohamed bin Zayed Al Nahyan on his election as the new President of the UAE and the ruler of Abu Dhabi.

Modi is visiting the UAE on his return to India after travelling to Germany for the G7 Summit. He will leave the UAE the same night on June 28, the ministry said.

This is Modi's first visit after signing CEPA (Comprehensive Economic Partnership Agreement). Modi's visit is much awaited, as was postponed during Expo held recently. His visit will give strong momentum to the relations between the two nations, with bilateral ministerial meetings and outreach programmes underway on the benefits of the free trade deal.

According to news portals quoting IANS, the Indian Business community in the UAE is enthusiastic about Modi's upcoming visit. Industry leaders are looking at it with optimism.

Dr Azad Moopen, Chairman and MD, Aster DM Healthcare said, "The UAE and India have shared a strong bond for decades which has been strengthened further this year with the signing of the CEPA. Apart from the country-to-country and people-to-people relationship between the two countries, President of UAE HH Sheikh Mohmmed Bin Zayed Al Nahyan and PM Narendra Modi share a very strong personal equation and friendship and this visit is the first after HH Sheik Mohammed Bin Zayed has assumed office as the President. From a business angle, CEPA is expected to double the bilateral trade to $100 billion in the next five years, up from the current $50-60 billion at present, while eliminating tariffs on a range of products being exported by India and the UAE. The visit is expected to reaffirm the commitment of the two governments which would see the various Indian and UAE businesses seizing the opportunities and making more investments in either country."

Kamal Vachani, Partner and Group Director of Al Maya Group said that Prime Minister Modi's fourth trip to the UAE is significant for several reasons. "The benefits of the Comprehensive Economic Partnership Agreement (CEPA), which came into effect earlier this year, are expected to occupy centre stage during Modi's visit to the UAE. CEPA will boost further trade volumes to a large extent. India will export not only traditional items but also new products. The UAE residents will enjoy new products from India as new companies will enter UAE through the opening of a new trade channel," he said.

Bobby Naqvi, former Editor of Gulf News said, "PM's visit to the UAE is significant in many ways. First, in May, India and UAE operationalized the Comprehensive Economic Partnership Agreement. Second, it is coming in the backdrop of the GCC countries' condemnation of offensive remarks made by BJP spokespersons against the Prophet of Islam. Repairing the damage and putting relations back on track must be on top of the visit's agenda. There is also the protocol of the death of UAE's former President Sheikh Khalifa bin Zayed Al Nahyan."

Chandu Siroya, Vice Chairman, Dubai Gold and Jewellery Group and MD Siroya Jewellers said that PM Modi's visit will definitely add value to the relations in terms of diplomacy and business. "As we all know that PM Modi has good personal relations with the rulers of UAE, every Indian will be benefited with this visit, as now India and the UAE are sharing the relations at multiple levels including culture, entertainment and import and export," he said.

Industry leader in the steel sector, Bharat Bhatia, founder & CEO of Conares, added that the visit from PM Modi is exciting not just for the Indian business community, but for the entire Indian community in the UAE as a whole. "Recently, the signing of the CEPA has created countless new opportunities for investment in the two countries. It will therefore be interesting, to keep an eye on this latest visit as it may define economic development for both countries in the next few years. Moreover, PM Modi's visit will enhance the bilateral relationship between India and the UAE as well," he said.

"This visit might be to reaffirm India's strong commitment to and strategic partnership with the UAE. It is understood that Prime Minister Modi will, while expressing his condolences to the late President HH Sheikh Khalifa bin Zayed and congratulating President HH Sheikh Mohammed bin Zayed on his becoming the UAE President, will also push for strengthening ties under the CEPA. Both countries are optimistic to raise the two-way trade to US$100 billion. We might hear some announcement towards that direction," Mr Rizwan Sajan, Founder and Chairman of Danube Group, said.

"As private sector players, we are ready to play our role within the CEPA framework and we are waiting to see how we can expand our role to strengthen the relationship."