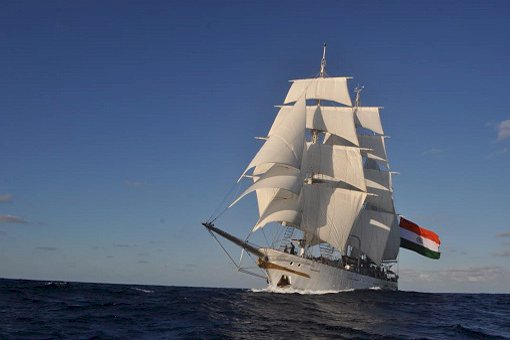 INS Tarangini, the first Sail Training Ship of the Indian Navy, departed on Wednesday for Lokayan-2022 from Southern Naval Command (SNC) in Kochi.

The highlight of this voyage will be hoisting the national flag in the heart of London on the occasion of 75th Independence Day as part of Azadi Ka Amrit Mahotsav. During the voyage, the ship will be visiting 17 ports across 14 countries.

The voyage includes the main aspect of training under trainee officers that form a part of the first Training Squadron, as well as participating in prestigious Tall Ship Race events in Harlingen, Antwerp and Aalborg.

“INS Tarangini, the sail training ship of Southern Naval Command is embarking on a seven-month-long voyage for participating in tall ship races as well as to impart training to our sea training. The ship will touch 17 ports and visit 14 countries,” Rear Admiral Antony George said.

As part of the Azadi ka Amrit Mahotsav, he said, the ship will be entering London where the national flag will be hoisted.

He also said that it will be a “momentous occasion” for the Indian Navy as well as the country.

“During the course of this voyage, 300 sea trainees would embark on the ship at various phases for undergoing sea training. While participating in these tall ship races earlier, the ship has done very well. And we look forward to the ship coming out with flying colours during the tall ship races,” Rear Admiral George said.

The ship will come back in November this year.

I can retrieve data removed for Dileep: Hacker

I will reply to Cong show cause notice: Thomas