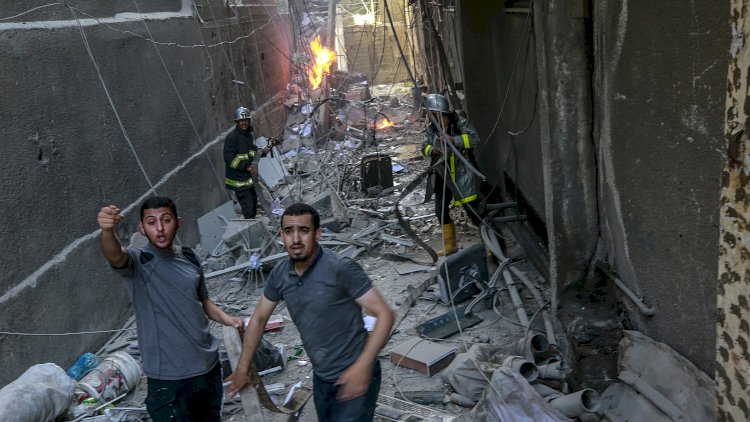 TENSIONS remain high after a night of heavy weapons fire between the Gaza Strip and Israel, according to a BBC report.

Dozens of rockets fired from Gaza lit up the sky, following the killing of at least 10 people in Israeli air strikes.

Militant leader Tayseer Jabari was among the dead. Israel said the strikes followed an "immediate threat" from his Palestinian Islamic Jihad (PIJ) group.

PIJ responded by firing more than 100 rockets into Israel overnight "in an initial response".

Most were intercepted by Israel's Iron Dome missile defence shield, but sirens sounded in a number of Israeli cities throughout the night.

The Israel Defense Forces (IDF) said it had resumed rocket strikes against multiple militant positions in Gaza, continuing the attacks into the early hours of the morning.

On Saturday, Israel said it had arrested 19 members of PIJ in raids across the West Bank.

The overnight exchange of fire marks the most serious escalation in violence since May 2021's 11-day war, which left more than 200 Palestinians and a dozen Israelis dead before a ceasefire was agreed.

Meanwhile, Interior Minister Ayelet Shaked said: "We don't know how this will play out... but this could take time... this could be a lengthy round [of conflict] and a hard one."

The IDF said its attacks targeted sites linked to PIJ, including the high-rise Palestine Tower in Gaza City which was hit on Friday in a loud explosion which left smoke pouring from the building.

An Israeli military spokesman estimated "about 15 militants" were killed in the operation.

Local health officials inside Gaza say four PIJ militants, including Tayseer Jabari, have been killed since the strikes started.

The IDF said Tayseer Jabari was a "senior commander" in PIJ, and accused him of having committed "multiple terrorist attacks" against Israeli civilians.

Five-year-old Alaa Kaddum was among those killed in the strikes, local officials also said.