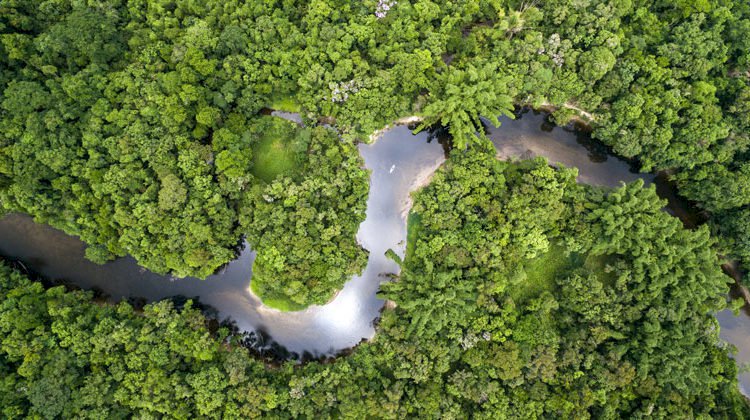 FOR every three trees dying from drought in the Amazon rainforest, a fourth tree – even though not directly affected – will die, too.

In simplified terms, according to Environment News, that’s what researchers have now found using network analysis to understand the complex workings of one of Earth’s most valuable and biodiverse carbon sinks.

The regions most at risk of turning into savannah are located on the forest’s Southern fringes, where continuous clearing for pasture or soy has already been weakening the forest’s resilience for years.

The rainforest in South America maybe losing rain and with it its moisture supply as climate change sends more frequent and more severe drought spells to the Amazon Basin. That lack of rain is life-threatening to the forest because it breathes water:

Once rained down, the soil takes it up as much as the plants, and both release a great amount again through evaporation and transpiration. In this atmospheric moisture recycling, the forest creates much of its own weather, generating up to half of the rainfall over the Amazon Basin. And while it is highly efficient, the moisture recycling system ultimately relies on how much water is initially put into the system.

The scientists have now found that even if a dry spell affects only one specific region of the forest, its harm stretches beyond that region by a factor of 1.3: As lack of rain strongly decreases the water recycling volume, there will also be less rainfall in neighbouring regions, hence putting even more parts of the forest under significant stress.

“More intensive droughts put parts of the Amazon rainforest at risk of drying off. Subsequently, due to the network effect, less forest cover leads to less water in the system overall, and hence disproportionally more harm. And while we’ve investigated the impact of drought, that rule also holds for deforestation. It means essentially, when you chop down one acre of forest, what you actually are destroying is 1.3 acres,” Nico Wunderling, author and researcher at the Potsdam Institute for Climate Impact Research, explains.