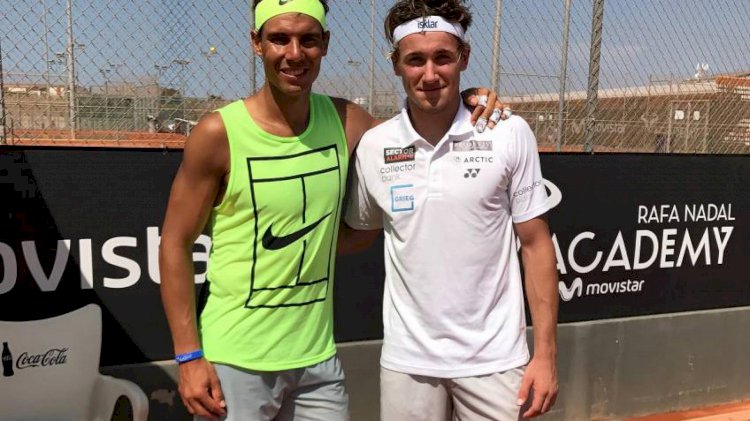 RAFAEL Nadal crushed Casper Ruud on Sunday to lift a record-extending 14th French Open trophy and increase his lead at the top of the list of men's Grand Slam champions, SportStar reports.

There was a sense of deja vu as the Spaniard, who turned 36 on Friday, swept aside Norwegian Ruud 6-3, 6-3, 6-0 on a balmy afternoon in Paris to ensure he has won every time he has reached the final at the claycourt Grand Slam.

By lifting the Musketeers' Cup again, Nadal was halfway through the calendar Grand Slam for the first time in his career after he won the year's opening major at the Australian Open.

Victory gave Nadal a record-extending 22nd Grand Slam title and put him two clear of world number one Novak Djokovic of Serbia and Swiss Roger Federer in the men's race for the most major titles.

Similar to his leadup to the Melbourne Park major, Nadal arrived at Roland Garros with persistent fitness doubts after suffering a rib stress fracture and a chronic foot injury.

But Nadal, who passed fellow Spaniard Andres Gimeno as the oldest Roland Garros men's singles champion, again proved that even at less than 100% he is still a mountain too steep to conquer on the red clay of Roland Garros.

He got a standing ovation as he walked onto Court Philippe Chatrier under overcast skies as fans livened up the atmosphere with drums and trumpets.

The Spaniard, who has a statue erected in his honour at the claycourt arena in Western Paris, kickstarted the party early for his fans.

Nadal and Ruud had never played a competitive match before Sunday, but the duo has hit together plenty of times at the Spaniard's academy in Mallorca and the Norwegian said he has never won a practice set against his idol.

The record will stay the same after Sunday in favour of Nadal who is 13 years older than the Norwegian.

Ruud has led the men's Tour since the start of the 2020 season in claycourt wins, finals and titles and was the first man from his country to make a Grand Slam singles final but he did not have enough in his armoury to challenge Nadal.