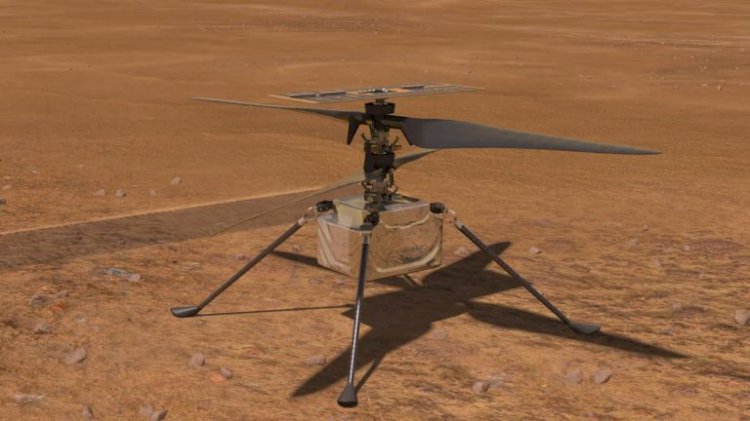 THE first helicopter that NASA sent to Mars worked so well that it is sending two more, reports The New York Times.

The helicopters are similar to Ingenuity, the “Marscopter” that accompanied NASA’s Perseverance rover to Mars. But they’ll have the added ability of being able to grab and transport small tubes filled with bits of Martian rock. (Think of them as extraterrestrial drones, similar in concept to the ones Amazon has been developing to deliver packages.)

That is part of a major rejiggering of NASA’s next great mission to Mars, a collaboration with the European Space Agency to bring Martian rocks back to Earth for close examination by scientists using state-of-the-art laboratory equipment that cannot fit into a spacecraft.

“We have a path forward using a revised and innovative architecture,” Thomas Zurbuchen, the associate administrator for NASA’s science directorate, said during a news conference on Wednesday that provided an update on the mission, known as Mars Sample Return.

The Perseverance rover has been drilling rock samples during its exploration of a crater named Jezero. Its focus is on a dried-up river delta along the crater rim, a prime location where signs of ancient life might be preserved if any organisms ever lived there.

The original plan was to send a rover built by the ESA to pick up the samples and carry them back to the lander, where they would be loaded onto a rocket and launched into Martian orbit. Another spacecraft would grab the container with the rocks and take them to Earth. But the design of the rover was becoming bigger, and it, along with that rocket, was getting too heavy to fit on one lander. Earlier this year, NASA announced that it was going to use two landers — one for the rover, and one for the return rocket.

The mission redesign eliminates the fetch rover. Instead, the plan is for Perseverance to drive to the lander, where 30 rock samples would be loaded onto the return rocket. As Curiosity, a rover with a design that is almost identical to that of Perseverance, continues to operate on Mars a decade after its arrival, NASA managers are confident that Perseverance will still be in working order when the Mars Sample Return lander arrives in 2030.

The trip back to Earth would take a few more years, landing in a small capsule in 2033.

NASA officials have been surprised by the continuing accomplishments of Ingenuity, carried to Mars on the underside of Perseverance. Originally, the helicopter was going to fly a few times during a one-month technology demonstration soon after the mission landed on Mars in February 2021, and then Perseverance would leave Ingenuity behind and get on with its main scientific mission. Ingenuity has now flown 29 times.

Most wanted Al-Qaeda leader killed in US drone strike