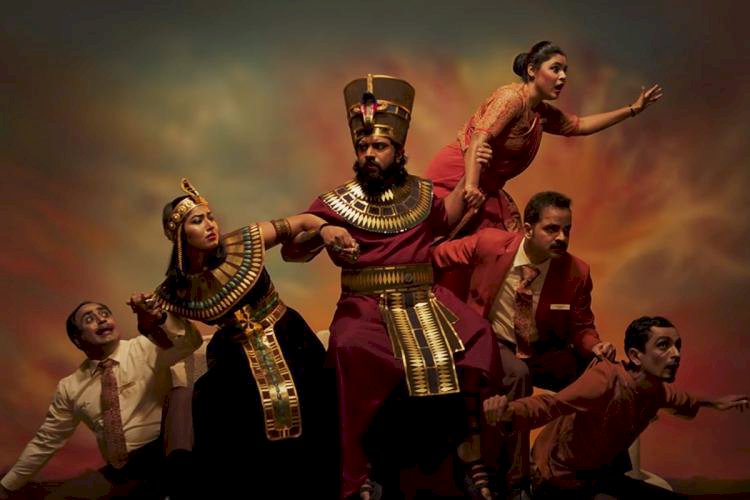 The minute-long video presents the movie’s main characters against the backdrop of a play. The teaser starts with the host requesting the audience to switch off their gadgets or put them on silent. However, before he can finish his sentence a drama surfaces backstage – the lead actors are nowhere to be found.

As expected, two others from the team fill in for the main characters at the last minute. And then we see the characters of the play ‘Kanakam Kamini Kalaham’ turning around in slow motion. The comical music coupled with the backdrop set the tone for an entertaining movie.

Sharing the teaser, Nivin noted that cinema provides him with the opportunity to experiment. He added that he has tried to be a part of beautiful stories and cinema that has room for experimentation. He also wrote that this project is close to his heart. “Cinema is where I want to be, where I want to experiment & create beautiful stories. I have tried to do that for past 11 years & here's something special and close to my heart #KanakamKaaminiKalaham,” the actor tweeted.

The cast of Kanakam Kamini Kalaham includes actors Sudheesh, Jaffer Idduki, Joy Mathew, Sivadasan Kannur, Grace Antony and Vinay Forrt, among others. The project marks the first collaboration between Nivin and filmmaker Ratheesh. Vinod Illampally has been roped in as the director of photography (DOP), while Manoj Kannoth is on board as the editor. Bankrolled by actor Nivin Pauly, Kanakam Kamini Kalaham has music by Yazken Gary Periera and Neha Nair.

Filmmaker Ratheesh rose to fame with his directorial debut Android Kunjappan Ver 5.25, which was released in the year 2019. The makers of the movie recently announced that the sequel to Android Kunjappan has been titled Alien Aliyan. Bankrolled by Santhosh T Kuruvilla, under the banner of STK Frames, the movie will see Suraj Venjaramoodu and Soubin Shahir reprising their roles from the original. - The News Minute

59 years ago, this Hindu man built a mosque funded by a Christian