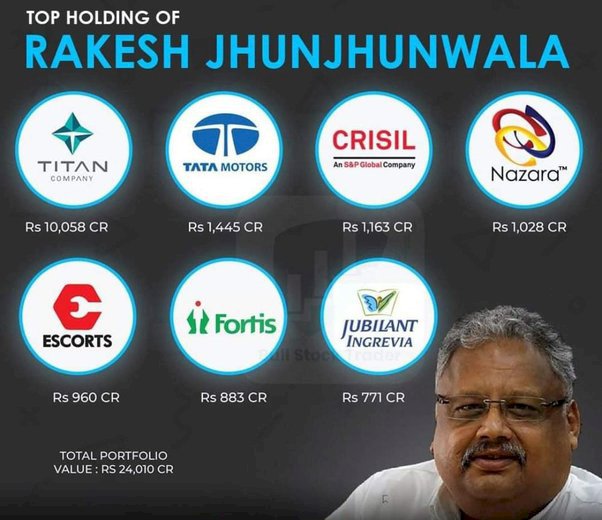 RAKESH Jhunjhunwala, India's Warren Buffet, or famously called the Big Bull, is no more. He ruled the Indian stock market for decades, making intelligent investment choices to build an empire of stock holdings worth over ₹40,000 crore. He was India's 36th richest person, with a net worth crossing $4 billion.

On the basis of information provided to the Indian bourses (June 2022), Rakesh Jhunjhunwala, who recently launched his own airline Akasa Air has 32 company holdings.

Just like a witted investment veteran, Rakesh Jhunjhunwala placed his eggs in different baskets and spread his equity portfolio across various sectors. With comparatively higher ownership of real estate and construction of 13%, Jhunjhunwala invested 6% in Finance, 6% in Pharmaceuticals, 6% in Banking, 6% in construction and contracting and 3% in sectors like computers, software, infrastructure, footwear, auto, packaging.

As a qualified CA and son of an Income Tax officer, Jhunjhunwala entered the stock market in 1985, when Sensex was at 150 points with just ₹5000 and when he ended his journey in 2022 Sensex is nearing the 60,000 mark.

Rakesh Jhunjhunwala’s first big profit was seen at ₹0.5 million in 1986 when he bought 5,000 shares of Tata Tea at ₹43 and within 3 months it was trading at ₹143. He made a profit of over 3 times by selling the stocks of Tata Tea. Then there was no looking back.

Jhunjhunwala never gave up on his love for Tata companies and its stocks, he held 1% each in Tata Motors with shares worth 1,731 cr and Tata Communications valuing ₹336cr

Between 1986 and 1989, he made ₹20-25 lakhs from his investment at Dalal street. His next big investment was Sesa Goa, which he initially bought at ₹28 and then increased his investment to ₹35. Soon, the stock rallied to ₹65.

In an interview with Economic Times, Rakesh Jhunjhunwala recalled buying Tata Power stocks amid the great recession of 1986 and see his total net worth rise to ₹50-55 lakhs which he used to buy 4 lakh shares of Sesa Goa in forward trading, worth ₹1 crore.

As of June, 2022, with a 17% stock holding, Rakesh Jhunjhunwala owned 100.7 million shares of Star Health and Allied Insurance Company, worth a whopping ₹7017 cr.

His other major stock holdings include ₹2255 cr in footwear brand Metro, ₹1285 cr in Crisil and ₹853 cr in Fortis.

“Passionate investors always make money in stock markets. You will never fail in any work if you do it with passion," Rakesh Jhunjhunwala said.

The 62-year-old's entry into the capital-intensive sector raised eyebrows earlier this year, with many pointing to the chequered history of billionaire-backed airlines in India as well as the daunting global economic outlook. Jhunjhunwala had invested $35 million for an estimated 40 percent stake in the new airline.

"A lot of people question why I've started an airline. Rather than answer them, I say, I'm prepared for failure," the billionaire said.