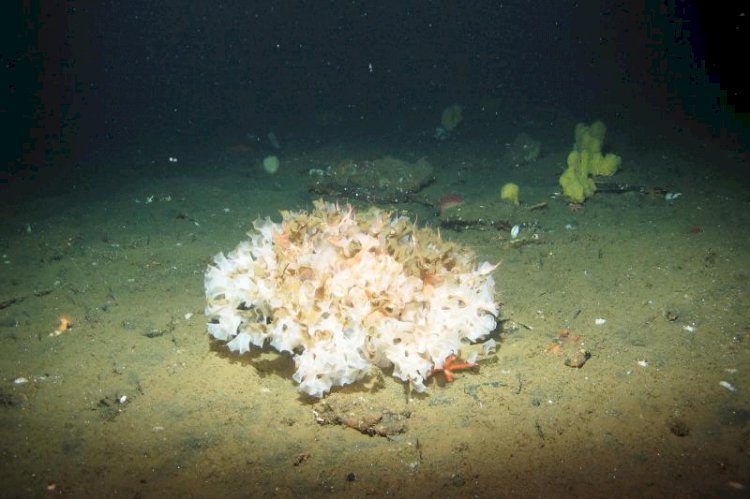 The vast mounds of glass sponges and their skeletons are rarely seen anywhere in the world. The discovery is even more unexpected considering the area is generally well explored. NOAA Fisheries has the details.

The sponge mounds were found off the California coast, which is home to various protected areas. Researchers have heavily explored habitats shallower than 300 meters (~1,000 feet) in the region’s two best-studied sites, Footprint Ridge and Piggy Bank.

During this late 2020 expedition, the survey team decided to use a remotely operated vehicle (ROV) to record and transmit live video in hopes of discovering what lurks in the 600-metre (2,000 foot)-deep valley between the two sites.

NOAA experts were on the Nautilus live chat when the ROV descended into the valley and stumbled across a crunchy-looking sponge bed. As the ROV followed and climbed up the outcrop, the scientists realized the bed seemed endless. Large sponge mounds like these are an important find. They can provide habitat for a variety of life forms and teach us more about how the deep ocean responds to changing environmental conditions.

Sponge reefs were common during the Jurassic period, but they were thought to have disappeared completely until they were spotted off Canada’s coast in the 1980s. Since then, the fragile ecosystems have been found off the coasts of British Columbia, Washington, and Alaska—and now, in California.

Sponge aggregations can form complex structures. Reef-building glass sponges have fused skeletons that stay intact, even after the sponge dies. The remaining skeletons trap sediment, which creates their brown color.

The skeletons act as a platform for living, growing sponges. This process forms structures called bioherms — or mounds of silica skeletons, sediment, and living sponge. These bioherms have been recorded up to 19 meters (60 feet) in height.

“The patches of living sponge looked like white pom-poms sitting on top of the dead brown skeletons. Such potential bioherms are a rare sighting,” recalled marine scientist Abigail Powell. The ROV surveyed the sponge bed for hours, but by the end of the expedition, the team still had questions. “We had to get back down there!” remarked senior scientist Elizabeth Clarke.

Back in the Water

Research ecologist Lizzie Duncan, calling this expedition “a story of collaboration,” helped submit a proposal to NOAA and partners to continue exploring the exciting valley.

The team returned to the sponge mounds in August 2021. They used an autonomous underwater vehicle (AUV) to survey the valley by combing up and down the sponge patch, like a lawnmower. The AUV continuously captured images along the transect. These pictures are being superimposed into a detailed portrait of a section of the sponge mounds.

Researchers are currently using images to determine which fish species are associated with the sponge mounds. This work is contributing to ecosystem-based fisheries management—a holistic approach to promoting sustainable fisheries—in the region.

Additionally, scientists have learned that the patch shares many characteristics in common with other types of sponge reefs. These include its wide spatial extent, complex 3D structure, presence of two reef-building species, and presence of both living and dead sponges.

However, the sponge aggregation’s classification is an unfinished story. The research team is still hesitant to label the mounds as a “reef.” The patch has differences from known sponge reefs, including the observation that such a large proportion of the mounds’ sponges are dead.  Key questions remain, including how thick the sponge mounds are, how old they are, and why they are mostly dead.

This research is helping scientists to understand more about the life cycles of deep-sea sponges, from how living and dead sponges form mounds, to how sponges react to physical changes in our ocean. The study is also revealing how much remains to be explored, even in some of the most frequently surveyed US waters!