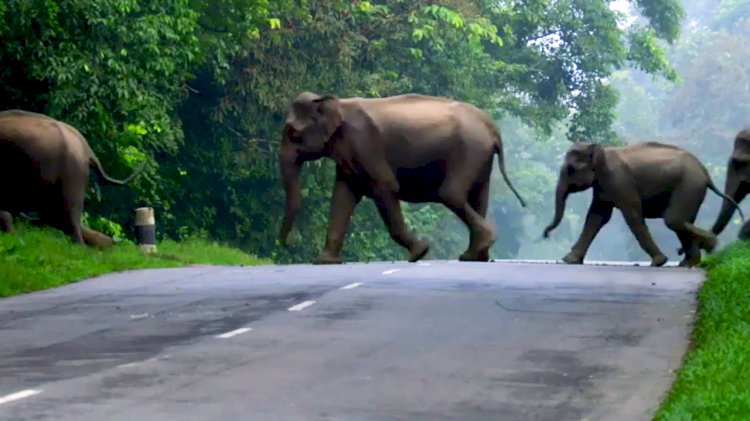 THE National Highway Authority of India (NHAI) is to redesign the ongoing road-widening project between Marappalam and Ooty in the Nilgiris district to ensure the free movement of wild elephants.

The Highways Department has already allocated Rs 63 crore for the ongoing project which commenced work in January 2022. However, the redesigning work was ordered after a group of Judges from the Madras High Court conducted an inspection of the ongoing road-widening project between Marappalam to Ooty in Nilgiris.

The judges including V. Bharathidasan, R. Subramanian, M. Dhandapani, R. Pongiappan, N. Sathishkumar, and G.K. Ilanthiraiyan conducted an inspection at the Nandagopal bridge near Marappalam. The judges found that the herd of wild elephants including calves was finding it difficult to cross the hill road.

The National Highways department has requested the Nilgiris forest division officials to conduct a study and find out a suitable forest land of around 23.7 km stretch where wild elephant movements are detected. The highways department is planning to construct ramps and to provide space on both sides of the hill for the elephants to cross safely.

NHAI officials said that they were planning to complete the work in two phases with 9.7 km of the road from Marappalam to Coonoor being widened to commence at a cost of Rs 36 crore. The balance 14 km stretch from Coonoor to Ooty will be done at a cost of Rs 27 crore. The sideways and the tough terrain in the stretch between Marappalam to Connoor have made the construction of the stretch costlier.

The NHAI authorities told IANS that the widening of the roads would be completed by December 2022. The highways department said that the construction of the road from Ooty to Gudalur road will soon commence and tenders for the same will be called for. The stretch is 16 km in length and an amount of around Rs 75 crore is earmarked for it.

Kejriwal to visit Kerala to take part in Twenty20 event