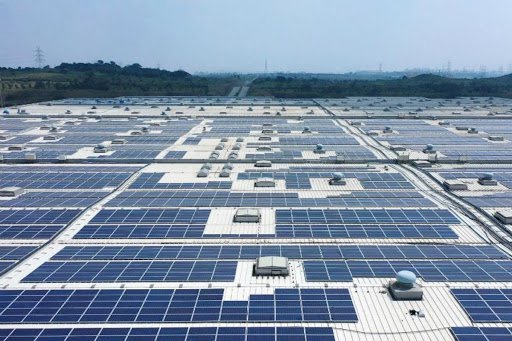 FIVE years after disrupting the telecom space with the launch of Jio, Reliance Industries Ltd (RIL) has announced yet another game-changing move — a mega entry into green energy.

The company is planning to get into solar power generation and manufacturing, hydrogen production, e-fuels, and energy storage under its “New Energy and New Materials” division.

It will also set up a platform for renewable energy project finance to source long-term global capital for investment in these sectors.

The three-pronged plan will cumulatively involve an investment of Rs 75,000 crore over three years, Mukesh Ambani, chairman, RIL, announced during its annual general meeting (AGM) on Thursday. The AGM was also addressed by his wife, Nita Ambani and his children, Akash and Isha.

Response to the RIL stock was, however, not so enthusiastic. It was the top loser among index stocks and ended 2.35 per cent lower at Rs 2,153.35 on the BSE. Some of this decline can be attributed to the stock’s 12 per cent rise in the past one month. In comparison, the S&P BSE Sensex was up 3.3 per cent during this period.

Under the plan, RIL will set up a Dhirubhai Ambani Green Energy Giga Complex, spanning 5,000 acres, in Jamnagar, Gujarat, at Rs 60,000 crore while another Rs 15,000 crore will be invested in value chains, partnerships, and future technologies, including upstream and downstream industries.

RIL will create a capacity of producing solar power of 100 Gw in 10 years. The ambition is stunning as India’s installed capacity of solar power is now 40 Gw (including ground mounted and rooftop).

The move will bring RIL into direct competition with the Adani group. Adani Solar has 3.5 Gw of annual solar photovoltaic production capacity while Adani Green Energy has a portfolio of 25 Gw of commissioned and under construction projects.

For solar manufacturing, RIL will have integrated manufacturing starting from raw silica and poly silicon to ingot, wafers to finished products cells and modules. This will be a major addition to India’s solar manufacturing plans though the company did not reveal the capacity it would be putting up.

India imports close to 90 per cent of its solar cells and module requirements. Eighty per cent of this is from China. According to the industry data, India has 3,100 Mw of cell manufacturing capacity and 9,000 Mw of module manufacturing.

RIL will focus in a major way on rooftop solar and decentralised solar installations in villages. The second part of the plan entails creating a value chain for the giga factories. It will be part of the Jamnagar complex of the company.

Ambani said the centre would also “enable and partner with thousands of green MSME entrepreneurs, who can deploy kilowatt-to-megawatt scale solutions in agriculture, industry, residences and transportation”.

All of these three together will be part of its architecture for India’s decentralised green economy.

“With these new initiatives, Reliance will put Gujarat and India on the world solar and hydrogen map,” Ambani said in his AGM speech. - Business Standard

UK could suffer food shortages due to lorry driver crisis