Space travel to include people with disability 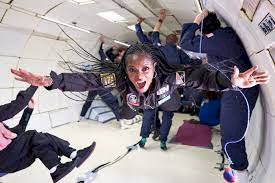 A TEAM of scientists, engineers and social workers is working on a space exploration project for people with disability.

As part of the project named AstroAccess a group of 12 disabled scientists, veterans, students, athletes and artists launched into a zero-gravity environment last month.

Conducted by the Zero Gravity Corporation (Zero-G), the flight was aboard a plane equipped with a special padded section that flies up to an altitude of around 32,000 feet and then begins a rapid descent at about 4 miles per second. This quick descent creates a free fall, or microgravity, weightless effect lasting roughly 30 seconds.

Afterwards, the plane climbs back up to a stable altitude and repeats the process again. On the October 17 flight, the process was repeated roughly 15 times.

The historic parabolic flight aimed to address how disability looks like in a weightless, microgravity environment-like space.

"The whole point of this project is to demonstrate that people with disabilities are able to fly safely into space," said Dr Erik Viirre, director of The Arthur C. Clarke Center for Human Imagination at the University of California San Diego, and a neurologist at UC San Diego Health.

"What we're working on in this initial flight are demonstrations of a variety of different tasks that our Ambassadors will have to carry out, including navigating up, down, left and right; clear communication; and being able to move to a set location," he added.

The 12 AstroAccess Ambassadors selected for this first microgravity flight included four blind or low-vision Ambassadors; two deaf or hard-of-hearing Ambassadors; and six Ambassadors with mobility disabilities, all carrying out a variety of tasks and challenges in the weightless environment.

One of the challenges was seeing whether all crew members could perform basic safety and operational tasks, like navigating to oxygen masks. The crew also tested a procedure to see whether sound beacons can be used for blind members to orient themselves, and the effectiveness of haptic devices in communicating commands. They're also investigating how American Sign Language will be impacted by microgravity.

To get a better idea of what is needed for more inclusive space travel, AstroAccess plans to conduct a series of follow-on parabolic flights after this inaugural launch, the researchers said.

Oxford English Dictionary chooses 'Vax' as word of the year