Titanic will soon disappear in the deep sea! 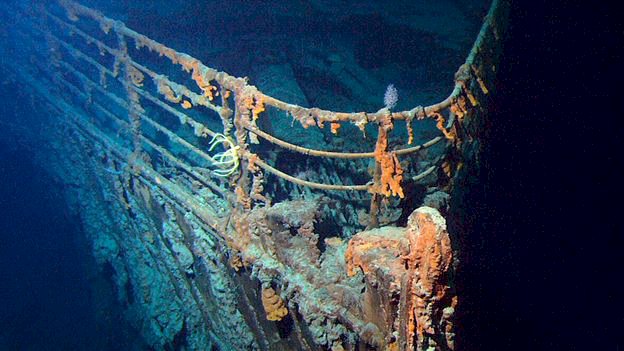 TITANIC is slowly disappearing completely. Metal-eating bacteria and ocean currents are eating away at Titanic dormant under the ocean. The ‘crow’s nest’ on the pyramid where the giant iceberg had been warned just before the collision had already gone. It is to be known that a new expedition will be started in a few days, including tourists of Titanic in the deep sea.

‘Titanic is floating in the sea, with no return. Stockton Rush, president of Oceangate Company, which is exploring the Titanic’s sinking area in the North Atlantic, explains the mission’s objective, saying that we need to collect as much information as possible before its completion.

Along with bacteria, seawater is also challenging the 109-year-old Titanic. The bacteria dissolve the kilograms of iron that are part of the Titanic every day. The Titanic is expected to sink at sea in a few decades without significant remains.

Since the discovery of the Titanic under the sea in 1985, the wreck of the ship has undergone many changes. The protruding 30 metre tall Titanic poles collapsed. On the flagpole is said to be the crow’s nest, where those in charge of monitoring the ship’s trajectory had completely disappeared. The gymnasium near the winding staircase collapsed. A 2019 expedition found that the visible bathtub had disappeared when the captain’s cabin wall collapsed.

Ocean Gate Company will explore with state-of-the-art HD cameras and sonar equipment. As part of the deep-sea mission, each part of the ship and its contents will be classified. This could help researchers calculate the lifetime of objects submerged in the deep ocean. Oceangate also aims to collect information about marine life on the Titanic.

Forty more tourists, including archaeologists and oceanographers, are being taken to the bottom of the ocean to see the Oceangate Titanic. They will also be given an opportunity to operate the sonar equipment one by one. Tourists pay between $1 million and $1.5 million to see Titanic.

The Oceangate mission has no goal of retrieving any part of the Titanic. It is therefore unlikely that there will be any significant controversy surrounding this mission. The RMS Titanic, which previously owned the wreck, was controversial in its attempt to recover the radio from the Titanic. The RMS Titanic argued that it should be found as a radio that had received a distress message from Titanic. But the US government went to court against it. The US claimed that the armistice was in violation of an agreement with Britain to keep parts of the Titanic underwater. - sproutwired.com