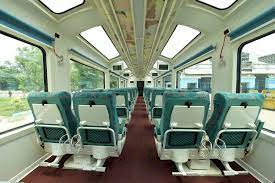 Sharing photos of the new coach on his Twitter handle, Railway Minister Piyush Goyal wrote: "A Panoramic View of the Western Ghats: Wide window panes & glass rooftops of the first ever Vistadome Coach in Pune-Mumbai Deccan Express provide passengers with a unhindered, unique and unforgettable travel experience. Come, experience the Western Ghats as never before!."

An official added that first trip on the Vistadome coach from Mumbai to Pune was a sellout.

The Vistadome coach has big glass windows, glass roof, observation lounge along with rotatable seats that allow the passengers to enjoy the beautiful locations during the journey through the Western Ghats.

The official said that the passengers were eager to enjoy unhindered views of the valleys and waterfalls enroute, adding that the experience is similar to travelling in a Vistadome coach on the Mumbai-Goa route.

At present, the Vistadome coach service is operational in the Mumbai-Madgaon Jan Shadabdi Special train.

Now passengers on the Mumbai-Pune route can also enjoy the scenic beauty and experience being with nature while passing near the Matheran hill (near Neral), Songir hill (near Palasdhari), Ulhas river (near Jambrung), Ulhas valley, areas of Khandala, Lonavala etc., as well as the waterfalls and tunnels on the South East Ghat section.

The Railways had launched the newly-designed Vistadome coaches last year.

The official said that the Vistadome tourist coach has a larger viewing area, including a glass roof, with 44 seats for the passengers that can be rotated up to 180 degrees. The coach also has a Wi-Fi-based passenger information system.

The official said that for the first time, the Vistadome coach has been built on the LHB platform, which is more safe.

Pointing out the stand-out features of the new Vistadome coaches, the official said that they are equipped with air-spring suspension in secondary stage for better ride comfort, large glass windows and glass roof that boast electrically controlled opalescence, transparent roof for the passengers to get a panoramic view of their journey, and an observatory lounge with a larger window at one end. - mid-day