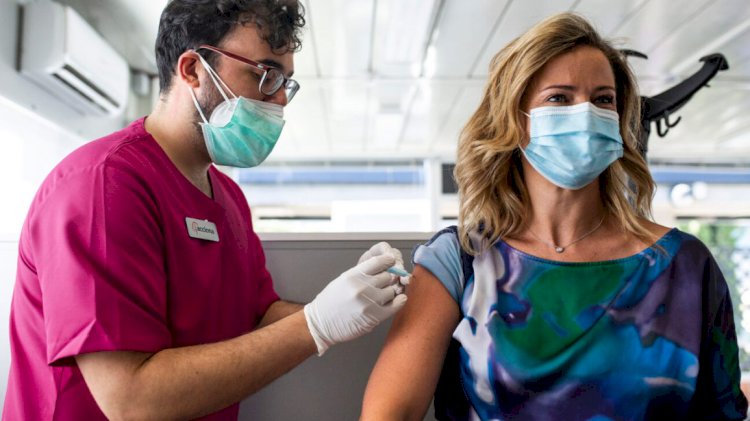 TWO doses of Pfizer or AstraZeneca’s Covid-19 vaccine are nearly as effective against the highly transmissible Delta coronavirus variant as they are against the previously dominant Alpha variant, according to a new study.

Research published in the New England Journal of Medicine on Wednesday showed the vaccines were highly effective against the Delta variant, now the dominant strain worldwide, provided a person had received two shots.

The study confirms headline findings given by Public Health England (PHE) in May about the efficacy of Covid-19 vaccines made by Pfizer-BioNTech and Oxford-AstraZeneca based on real-world data.

Wednesday’s study found that Pfizer was 88 percent effective at preventing symptomatic disease from the Delta variant with both doses, compared with 93.7 percent against the Alpha variant, broadly the same as previously reported.

“Only modest differences in vaccine effectiveness were noted with the Delta variant as compared with the Alpha variant after the receipt of two vaccine doses,” Public Health England researchers wrote.

Data from Israel has estimated that Pfizer’s shot is less effective against symptomatic disease, although protection against severe disease remains high.

PHE had previously said that the first dose of either vaccine was approximately 33 percent effective against symptomatic disease from the Delta variant.

“Our finding of reduced effectiveness after the first dose would support efforts to maximise vaccine uptake with two doses among vulnerable groups in the context of circulation of the Delta variant,” the authors of the study said.

Recently, researchers from Beth Israel Deaconess Medical Center in the US city of Boston also said that in a laboratory setting, the antibody response from the one-dose Johnson & Johnson vaccine worked well against Delta and that immune response lasted for about eight months.

In June, makers of Russia’s Sputnik vaccine also said that it was about 90 percent effective against the highly contagious Delta variant.

The shot, which Russia has actively marketed abroad, was previously found by researchers to be almost 92 percent effective against the original strain of coronavirus.

The Sputnik vaccine, however, has raised some controversy as it was introduced to the public even before a full trial was completed. It is still awaiting approval from the World Health Organization. - Al Jazeera

What is the adult film racket in which Raj Kundra is arrested?