What to expect flying in Emirates' new premium economy cabin 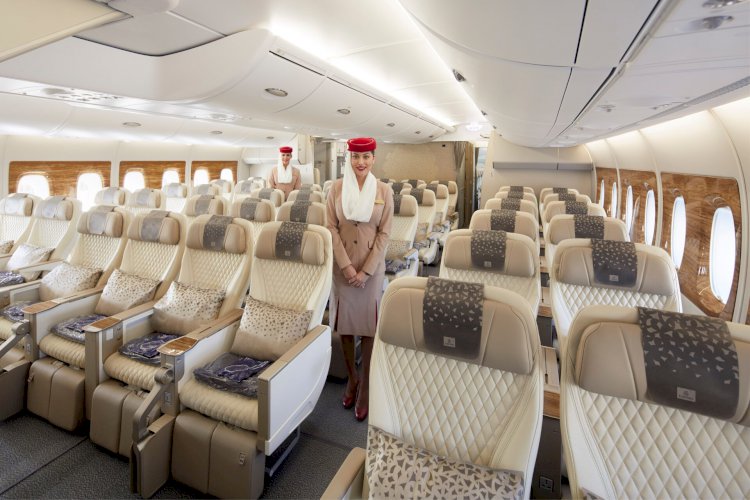 AFTER months of flying in soft launch, Emirates airline’s new premium economy cabins are now officially in service, according to The National.

Flight number EK001 departed Dubai for Heathrow just after 7.45 am on Monday as the first Emirates A380 flight on which travellers were able to book first, business, premium economy and economy seats.

The flight marked the launch of the new cabin class on Emirates' high-traffic superjumbos to London, Paris and Sydney. The service will be introduced on A380 flights to Christchurch from December.

With a capacity for 56 passengers, the newest cabin class has a two-four-two configuration, making it ideal for couples or families of four who want to sit together.

Passengers upgrading from the economy will be able to check in at a dedicated desk at Dubai International Airport, and will find their seats at the front of the double-decker aircraft.

Inspired by the airline's business cabins, the premium economy has leather seats with detailed wood panelling and passengers are offered a hot towel and a welcome drink directly after boarding.

There’s also a separate menu for travellers to choose meals from and these are served on chinaware and with stainless-steel cutlery for a more premium dining service.

Perhaps the biggest draw for passengers upgrading, especially those flying long-haul to Sydney, will be the wider seats that come with extra legroom.

Each seat has a pitch of up to 40 inches plus an eight-inch recline which means they can be adjusted into a cradle position. Calf rests, footrests and a six-way adjustable headrest will also help passengers get as comfortable as possible in the air. There’s also a handy cocktail table for drinks so passengers don’t need to put tray tables down when not dining.

Travellers seated in the new cabin will have a personal 13.3-inch seat-back screen, one of the largest in this cabin class, for in-flight entertainment.

Fares for premium economy seats are much more affordable than business-class fares.

For example, on flight EK075 on August 19 from Dubai to Paris, economy tickets start from Dh3,930, with an upgrade to premium economy starting from Dh560. The cheapest business-class tickets on the same flight are more than Dh8,000 extra.

Emirates plans to introduce a smaller premium economy cabin on select Boeing 777 jets. Seating up to 24 passengers, the new cabin will be located between business and economy.

Sexual harassment: Civic Chandran gets anticipatory bail in one case