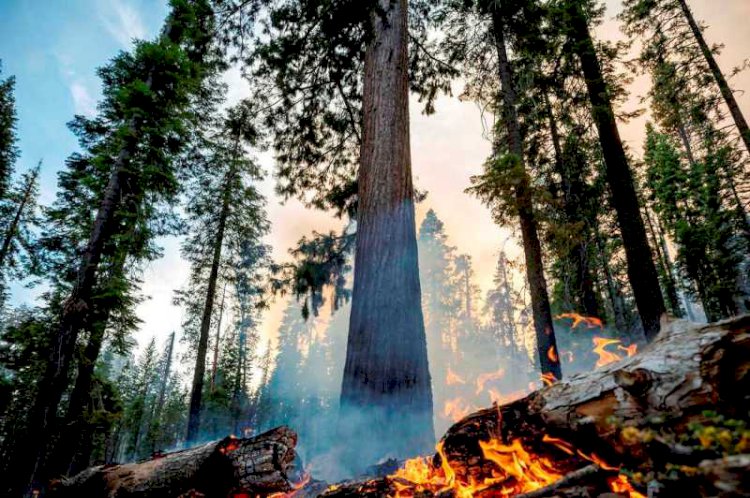 A GROWING wildfire in California is threatening the largest grove of giant sequoias in Yosemite National Park, reports the BBC.

The Washburn Fire has doubled in size over the past 24 hours, and it is now estimated to have burned 1,591 acres.

Firefighters are working in difficult terrain to protect some of the largest and oldest redwood trees in the world.

Residents and campers near the fire have been evacuated, and thick smoke has worsened the region's air quality and obscured the park's scenic views.

The blaze, which started on 7 July, threatens at least 500 giant sequoias in the Mariposa Grove, including the famed Grizzly Giant which is thought to be around 3,000 years old.

For now, none of them has been destroyed by the fire.

The Yosemite fire and aviation management department said it was "proactively protecting" the grove by setting up a sprinkler system to increase humidity around the trees and by removing potential fuels from the site.

The Washburn Fire has already forced nearly 1,600 people to evacuate the area, including the Wawona community located inside the national park and hundreds of campers staying close to Wawona.

The cause of the fire is still being investigated. Fire officials say that warm and dry weather conditions are making it difficult to control the flames.

Giant sequoias are some of the biggest trees on the planet. The largest is 83 metres (275 feet) tall and over 11 metres (36 feet) in diameter at the base.

Their extraordinary longevity - they can live to around 3,000 years - also makes them among the oldest living things on Earth.

The Mariposa Grove holds a historic place in American history as the first scenic natural area to be protected by the federal government for "public use, resort, and recreation". The legislation was signed by President Lincoln in 1864.

Last year, thousands of giant sequoias were destroyed by forest fires in California.

Officials say that more than 35,000 wildfires have burned across the US so far this year, which is well above average.