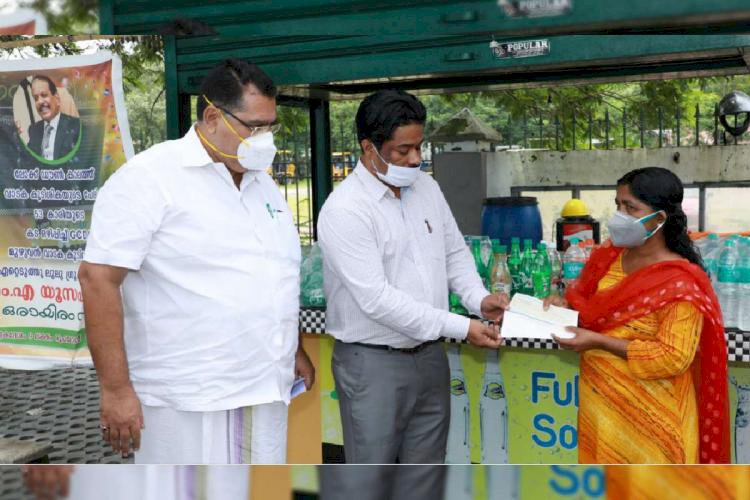 NON-Resident Keralite businessman MA Yusuf Ali has announced that he will settle the dues of a woman who was evicted by the Greater Cochin Development Corporation (GCDA) from her shop in Kochi for non-payment of rent.

Prasanna, 54, had to pay Rs 13,800 per month as rent but due to the Covid-19 pandemic and footpath maintenance work, she was not able to open the shop and could not pay the rent.

The woman, who was supporting her daughter with intellectual disability using the returns from the street shop of the GCDA, had amassed rental dues following the closure of shops due to the pandemic.

Prasanna was served a notice of Rs 9 lakh as rent dues but didn't have any means to pay this amount. GCDA officials had shut down the shop last Wednesday (July 14) and Prasanna had conducted a sit-in dharna before the shop for the past four days.

On hearing her misery, Yusuf Ali immediately deputed his Kochi office staff to meet the woman and promised her help. The amount of Rs 9 lakh as rent arrears would be paid by the Lulu Group. An additional amount of Rs 2 lakh would be handed over to Prasanna to help her run the street shop where she was selling refreshments and juices.

"When notice was served to me, I did not have any means other than thinking about suicide. I don't have Rs 9,000 with me, how can I pay Rs 9 lakh. I and my family thank Yusuf Ali saheb wholeheartedly for this benevolence showered on us. He was literally god-sent to us," Prasanna told IANS.

Speaking to IANS, Yusuf Ali said, "I came to know of the woman's problems through media and I directed our office at Kochi to pay the arrears today (July 18) itself. But being a Sunday, the GCDA office was closed, and on Monday morning itself, the amount will be paid and rent arrears settled. We will also be handing over Rs 2 lakh to her to restart her shop and buy necessary items for doing business."

The Lulu group was recently in the news for paying blood money of Rs 1 crore to save a Thrissur native in Abu Dhabi where he was sentenced to death after a Sudanese child was accidentally killed after the vehicle he was driving hit him. Becks Krishnan was on the death row after the accidental killing of the Sudanese boy in 2012. - The News Minute